Support this Outreach
Home > What Does 666 mean? 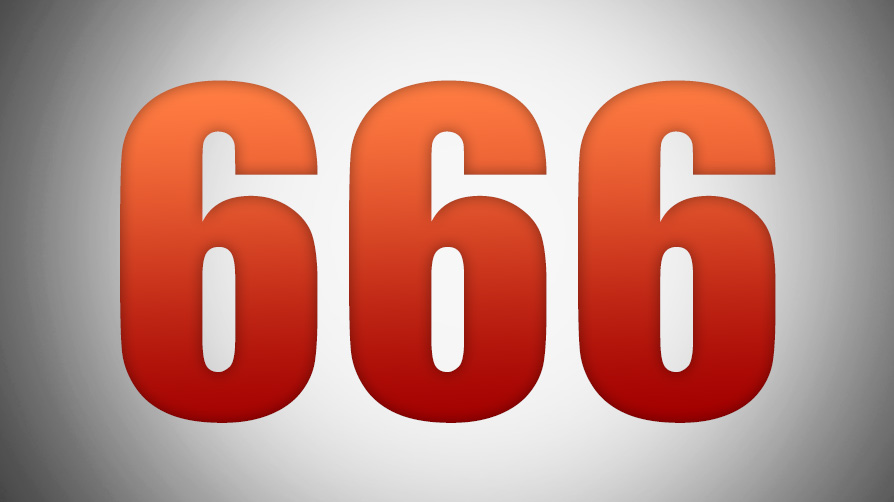 P. T. Barnum was an American showman of the nineteenth century who captivated American audiences with elaborate hoaxes that earned him a reputation as the "Prince of Humbugs." He didn't consider his shows to be underhanded because his audiences were willing participants in his ruses. In Barnum's words, "The people like to be humbugged."

During the Tribulation, there will be a new showman who surpasses every grandstander before him. Unlike Barnum, his tricks won't be lighthearted entertainment or freely chosen. Promising peace and prosperity, he will convince nations to disarm and grant him complete control. Together with his False Prophet, the Antichrist will convince millions that his government and his economic system is:

The price of admission to this world order will be a nonrefundable, mandatory mark worn by every citizen. It is known as the mark of the Beast, or simply "666."

What Is the Mark of the Beast?

In Revelation 13 we are told the Antichrist's right–hand man, the Beast from the earth (also known as the False Prophet), will introduce a mark to bolster his one–world rule. "He causes all, both small and great, rich and poor, free and slave, to receive a mark on their right hand or on their foreheads, and that no one may buy or sell except one who has the mark or the name of the beast, or the number of his name" (Revelation 13:16–17).

The word used in the passage for the mark is the Greek word charagma. In antiquity, this word was always associated with the Roman emperor. It often contained the emperor's name, his image, and the year of his reign. It was necessary for buying and selling and was required to be affixed to documents to attest to their validity. During the Tribulation, every living person will be required to take the Beast's mark. As in the days of Rome, it will be the only way to function in society.

Many have theorized about the meaning of 666. Goliath stood six cubits tall, and he wore six items of armor. Nebuchadnezzar's statue stood sixty cubits high, six cubits wide, and six musical instruments beckoned its worshipers. Some have named Nero, Hitler, various U.S. presidents and other world leaders as the Beast represented by the number. All these guesses are just that—contrivances that tell us nothing about the meaning of the number.

The most likely answer is perhaps the least intriguing. Revelation 13:18 tells us it is the number of man. We see this affirmed throughout Scripture. In Genesis, man was created on the sixth day. In the Old Testament Law, men were called to work six out of every seven days. A Hebrew could only be held as a slave for a maximum of six years. After six consecutive years of sowing a field, it was required to lay fallow. The number may not identify an individual so much as it identifies the human race.

We could sum it up to say the number 666 represents the ultimate in human ingenuity and competence. The Antichrist is the epitome of man's last attempt at ruling the world before Jesus overrules all those who oppose Him once and for all.

The mark of the Beast will offer hollow promises and incomplete relief during the Tribulation. It will give people access to buy and sell goods, but many will barely earn enough money to buy food (Revelation 6:6). Worse still, the mark will separate its bearers from the love of God and sentence them to eternal judgment.

If anyone worships the beast and his image, and receives his mark on his forehead or on his hand, he himself shall also drink of the wine of the wrath of God, which is poured out full strength into the cup of His indignation. He shall be tormented with fire and brimstone in the presence of the holy angels and in the presence of the Lamb. And the smoke of their torment ascends forever and ever; and they have no rest day or night, who worship the beast and his image, and whoever receives the mark of his name. Revelation 14:9–11

Mankind yearns for completeness because God has put eternity in our hearts (Ecclesiastes 3:11). The number 666 reminds us that there is something—or Someone—missing. Man's best efforts will never culminate in perfection. On our own, we will always come up short, and we will always long for the perfect completeness that can only be found in God.

Is There an Alternative to 666?

Those who refuse the mark of the Beast will suffer the Antichrist's wrath. They will be unable to buy, sell, work, or function in society. Anyone without the mark will be killed or starved (Revelation 14:9–11), and Christians will be martyred for their faith.

The only alternative will be to focus on what is unseen rather than what is seen. The apostle Paul endured beatings, shipwrecks, stoning, and more, yet he was not deterred from serving the Lord. In his second letter to the church at Corinth, Paul explained the source of his hope that sustained him through these trials:

Refusing the mark will cause temporary suffering, but the Bible assures us that "the sufferings of this present time are not worthy to be compared with the glory which shall be revealed in us" (Romans 8:18).

Does God Have a Number?

Six symbolizes man, but seven symbolizes God. Seven is the number of completion. God created seven days in a week and seven notes in the musical scale. In Leviticus 23, He ordained seven feasts. Jesus made seven "I am" statements about Himself, and He made seven statements from the cross. One day He will be honored with a seven–fold doxology by every creature on earth: "Worthy is the Lamb who was slain to receive power and riches and wisdom, and strength and honor and glory and blessing!" (Revelation 5:12)

Which Mark Will You Bear?

Citizens of the Antichrist's empire will be distinguished by the indelible mark of the Beast. Citizens of Christ's kingdom are also identified by a mark: God marks believers as His very own by sending His Holy Spirit to live in them.

In Him you also trusted, after you heard the word of truth, the gospel of your salvation; in whom also, having believed, you were sealed with the Holy Spirit of promise, who is the guarantee of our inheritance until the redemption of the purchased possession, to the praise of His glory. Ephesians 1:13–14

Some people try to put on a show for God. They go to church. They read their Bibles occasionally. They try not to swear or drink. They want God's blessings without His judgment. This might seem to work for a little while, but it is impossible to serve two masters (Matthew 6:24). Each of us must decide whose mark we will bear. As Joshua challenged the people of ancient Israel, each of us must choose "this day" whom we will serve (Joshua 24:15).